8,529 REILLY members around the world 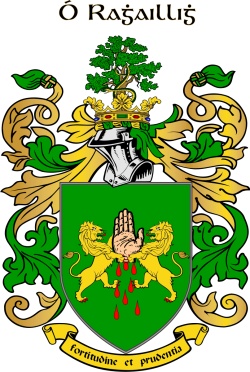 In the top 12 for frequency in Ireland, this name has been most prevalent around its homeland in Co Cavan and adjacent areas. The family are related to the O'Rourkes, and were chiefs of Breifne, comprising the presesnt counties of Cavan and Leitrim. As their power grew in the late Middle Ages, their influence spread to parts of Westmeath and Meath.

They maintained considerable influence in the time of James 1, and it was only the ferocious Cromwellian 'expugnatio' that saw their fortunes diminish. However, in the mid 19th century they were still landlords in their native lands of Cavan, possessing, among them, 30,000 acres.

In terms of activity, the Reillys were powerful in the church, giving five Primates of Armagh, and in the military field, both in Ireland, as rebels and Fenians, and abroad, as 'Wild Geese'.

At a crucial moment in Irish history, (O) Reillys have stepped up to the mark: one of the most outstanding being Colonel Philip McHugh O Reilly (died c. 1655). He was elected chief of his sept and became an initiator and the leader of the 1641 'rebellion'. Attainted for treason, by the English government in 1642, he ended his days in Spanish service in the Netherlands. His family links are all resolutely sound: his wife, Rose O Neill, was sister to Owen Roe O Neill, Ulster's leading rebel, and his daughters married into the MacMahon and Maguire families.

In the 1659 'Census' of Sir William Petty, we would expect to find the name listed as a 'Principal Irish Name' in its home territories.

Co Cavan returns are, unfortunately, missing from the register.

For O'Reilly in the same document, we have 122 for Co Cavan and 34 for Co Meath, and then descending numbers. This shows that the resumption of the 'O' is a relatively modern phenomenon.

John Boyle O'Reilly (1844-1890) born in Co Meath. He became a Fenian and was arrested and transported to Australia, where he fell in love with the warder's daughter! Sadly, this probably contributed to, or even caused, his attempted suicide. He escaped to the U.S.A. where he edited the Boston newspaper 'The Pilot'.

Appendix.
RAHILLY
Ó Raithile
A Co Kerry family.
'The O Rahilly' or Michael Joseph O Rahilly (1875-1916) born in Co Kerry. Irish Republican, although not a member of the I.R.B. He unsuccessfully tried to stop the 1916 Rising going ahead (according to the countermanding order of Volunteers' Chief-of-Staff, Eoin MacNeill). On failing to do this, he went out to join the leaders in the Liberty Hall. He was wounded in the fighting near the G.P.O. After the fighting was over, the British stretcher parties had orders to pass him by, and left him to bleed to death in the street.

Tell us about any famous REILLY (or surname variant) you think we should add here. We will get our genealogists to check them out and add them to the list. Thanks!

Join the conversation with the REILLY tribe

Areas of Origin for REILLY

Write an email address and click 'Invite' to share this page with more members of the REILLY tribe.

Discover where the REILLY Family members live around the world

Show off the REILLY Family Crest…